What it takes to earn the FMF qualification

Fleet Marine Force (FMF) is an earned qualification.  Only those sailors who are attached to forward-deployable Marine units are eligible to earn the FMF pin.  The rigorous process takes months and consists of study, written testing and oral boards.

Corpsmen who are attached to ships rather than to forward-deployed Marine units may earn Enlisted Surface Warfare Specialist and Enlisted Aviation Warfare Specialist quals.  Both require the same program of study, testing, and oral boards.  You'll hear the final oral board called the 'murder board,' by the way...which is a play on the expression "a murder of crows," as well as a description of a killer exam. 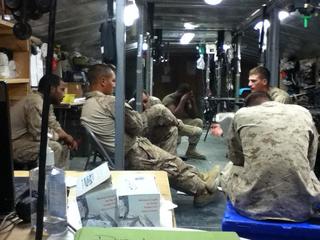 The Fleet Marine Force pin is more than just a piece of metal worn on a sailor’s uniform. It represents a rite of passage endured and a sacrifice made by the individual wearing it, and it signifies that the individual is an “FMF sailor.”

It represents the devotion a sailor has to the Marine Corps and to learning every aspect of his or her job. To earn the pin, a sailor is required to learn Marine Corps history, how a Marine unit operates and what it takes to be a Marine mentally and physically.

The pin shows the level of dedication a sailor has to the Navy and Marine Corps. Upon completion of the 13 - 16 month process, a ceremony is conducted giving the sailor the right to wear the pin.

Sailors must belong to an operational combat element of a Marine Expeditionary Force to start earning their pins. From the first day of arrival to their Marine Corps units, sailors can begin completing the requirements of earning the pin.

“It is a privilege to have earned the right to be considered part of the Corps,” stated Senior Chief Petty Officer Jonathan S. Sotingco, deputy medical planner with MWHS-1, 1st MAW. “It was a big deal to me when I [received the pin], Marines don’t hand out the eagle, globe and anchor to just anyone. We really have to earn it.”

There are more than 30 warfare designator pins, but when sailors see other sailors wearing the FMF pin, a higher respect is given to those sailors, knowing that they have proven they can keep up with the Marines, said Petty Officer 2nd Class G. Kalae Paoa, Navy personnel chief with MWHS-1.

Sailors are issued a book by their command that has all the knowledge required for their platform, said Cabrera.

Once the sailor has the Personal Qualification Standards book, he or she must present him or herself to a Marine non-commissioned officer or higher, who is familiar with FMF qualifications, and have him or her teach a section of Corps knowledge. Once the instructing Marine feels the sailor has sufficiently learned the topic, he or she administers a practical application and verbal test to ensure knowledge was retained and a signature of approval is given.

After the eight- to 11-month process, a written test is administered. A board is then convened of senior enlisted Marines and sailors.

The board consists of two separate sections. First, Marine Corps knowledge questions are administered, and if the individual qualifies, the board will decide if the sailor is ready to move onto the next section. The second section consists of detailed knowledge about the platform they’re assigned to. For example, the wing platform is Air Combat Element and consists of any detail about Marine Corps Aviation, from the name of an aircraft to the breakdown of each MAW squadron.

In order to earn and keep the FMF pin, sailors must perform and be held accountable to complete all standard Marine Corps training, such as qualifying on the rifle range and completing a Marine Corps physical fitness test and combat fitness test every year, stated Cabrera.

When Marines see the FMF pin, they know the sailor has sacrificed a lot of time and effort towards earning it, said Cabrera.Read more: http://www.dvidshub.net/news/64696/fleet-marine-force-pin-sailors-e...

Getting ready for deployment?  FMF corpsman dad Andy (aka Vettespace on N4M) shared this article:  A Deployment ;Advice for parents (other than a medically induced co... from 2nd Battalion 8th Marines. 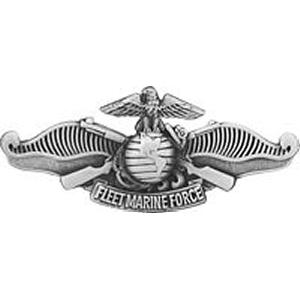 Thanks so much, Marcy.  No wonder my son almost fell all over himself when he was in DEP and he met an FMF Corpsman.

That is awesome, my son would have fallen all over himself too!! lol

My son is in the middle of going for his FMF pin right now. He is hoping to have it before he comes home in November or December. He is soooo happy to be getting the opportunity to get this achievement. His Marine commander is helping him out with this. He says it rough but he working through it. Nothing like learning the history and everything about the Navy but then to turn around and learn the history and everything about Marines a year later. LOL I cannot wait for him to get this. I will keep you all posted.

Good morning all.  I have a question about the FMF pin.  My son is currently in Japan and he said he got a section signed off for his pin today. How many sections are there and what does it consist of? I know he has been studying his butt off.  Thanks for your help.