Molly's Adopt A Sailor Cake/Pie in a Jar Instructions

You can use any pie dough recipe you like. Just take little pieces and press them into the jar. Make sure it's pressed all the way up the sides of the jar, about an 1/2 to 1 inch from the top. Do not grease the jars.
For the top crust, roll out some pie dough. You can use the ring part of your jar or a glass to cut round pieces. Make sure to cut in a vent so steam can escape. 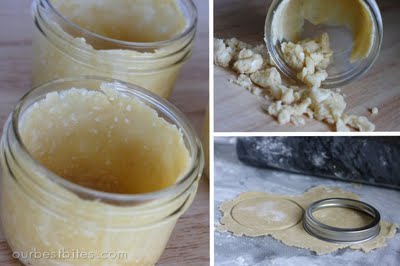 You can use any pie filling, canned or home-made. If you’re using fresh fruit, cut it into small pieces. (if you are using a firmer type of apple, you may want to microwave the filling to soften it a bit)

Slip the top crust onto the top of the pie. It will be large enough that the outside edge goes up the side of the dough-covered jar a bit. Then use your finger, or a fork, to press the 2 pieces of dough together to seal.
Do NOT put lids on jars for baking.
Wipe the rims, they need to be free of any crust or filling.
Place jars on a cookie sheet and bake at 375 for about 45 minutes. 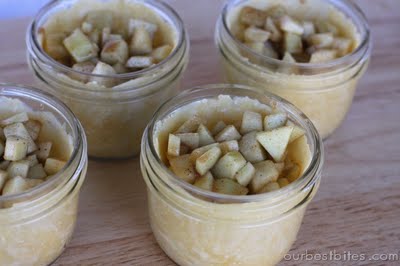 While pies are baking, boil the lids and rings in water. Take out one at a time to be placed on the hot jar.

As soon as pies are done, remove from oven one at a time, wipe rims of jars and put on a lid and ring. CAREFUL ~ they're hot!!

Jars will seal as they cool. Place the jars on the counter and listen for them to "ping" as they seal. If you miss the "ping", wait until they are completely cool and press on the top of the lid. If it doesn't move at all, it's sealed.

If you have some that don't seal, remove lids and rings and boil them again. Put the pies back into the oven for 10 minutes and then put on lids and rings. 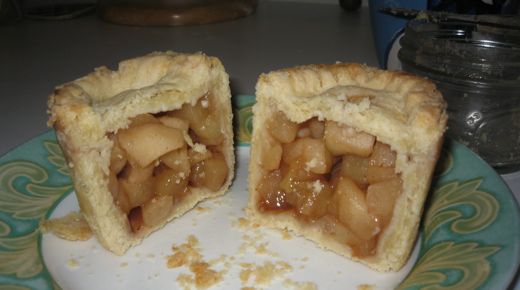 Sterilize straight sided wide mouth pint canning jars, lids and rings by boiling for 10 minutes. Keep the lids and rings in the hot
water until needed. Preheat oven to 325 degrees.

(I think it takes 8 pint jars per cake mix.)

Grease insides of jars. Pour 1 cup cake batter into each jar. Remove any batter from the rims.

Place the jars on a cookie sheet and bake at 325 degrees for 35
to 40 minutes or until toothpick inserted deep into center of cake
comes out clean.

While cakes are baking, sterilize lids and rings by boiling them in a saucepan of water. Keep them in the hot water until ready to use.

When the cakes have finished baking, remove jars from oven. Make sure jar rims are clean. (If they're not, jars will not seal
correctly). While jars are still hot, place lids on jars, and screw
rings on tightly. Jars will seal as they cool. Place the jars on the
counter and listen for them to "ping" as they seal. If you miss the
"ping", wait until they are completely cool and press on the top of the
lid. If it doesn't move at all, it's sealed.

Note:  If you're using a box cake mix, you may want to pour only 3/4 cup cake batter into jars because of how much they seem to rise.

You need about an inch of head space between the top of the cake and the lid.

If your cake rises too high in the jar, you can cut off the top of the cake before putting on the lids.